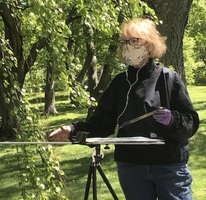 Ginny Zanger lives and works in Boston and Cape Cod, where she exhibits her most recent work at the Cove Gallery in Wellfleet. She uses water media in innovative ways  to create paintings and other works on paper that flow from her passion for the environment. Her work is in private collections throughout the United States and abroad, in the corporate collections, and in colleges and non-profit organizations.  Zanger has been awarded residencies at Tao Hua Tan (China), the Vermont Studio Center, Anam Cara (Ireland), and the Provincelands historic dune shacks. Her work was the featured centerfold in Artscope magazine. After only two years, she was awarded Copley Artist status at the historic Copley Society.  She exhibits widely throughout the Northeast.

Zanger’s formal art training began very early, as a child taking classes at the Metropolitan Museum of Art, and as a teenager at the Art Students League in New York and Woodstock. When it came time for college, she was warned by a Harvard interviewer: “We tell students, ‘if you want to be a poet or an artist, don’t come’. We don’t do that here.”  She ignored the warning and went to Harvard anyway, where there was, in fact no studio art offered. That decision put her artistic development on hold while she  pursued other passions. She eventually took advantage of fine arts courses at Boston University, Mass College of Art and Design, the Museum School of the MFA, the Fine Arts Work Center in Provincetown (where she learned monoprinting from Michael Mazur), Castle Hill Centre for the Arts in Truro, and private studies with Joel Janowitz, Rhoda Rosenberg, Lois Tarlow, and Teri Malo.

Prior to Harvard, Zanger had lived with local families in Argentina and Peru, and she completed high school in Buenos Aires. The bilingual and bicultural skills and interests she developed there set the course for a lively career in educating immigrant students back in the United States, where she also trained teachers and administrators, published books in English and Spanish on intercultural communication, earned a doctorate in that field, and won an award for her research. Later, she created a Teacher Leadership Center at Boston Children’s Museum where she served as a Vice President for ten years.

Coming of age in Argentina and Peru gave Zanger a commitment to social justice that has been a thread throughout her life and influenced her art. She was immersed in creating a series of underwater landscapes, when the Deepwater Horizon oil spill flooded the Gulf of Mexico, threatening the very ocean life that had  so inspired her artwork. Sickened and outraged, she followed closely the reports from the Gulf, and began researching all the photographic images she could find, from aerial views of the sinister orange plumes, to murky photos of dying coral enveloped by grey gunk. The Gulf spill tragedy pushed her to consider using her art to raise awareness about the impact of 5 million barrels of crude oil and 2 million gallons of dispersants.  The body of work that she made in response was exhibited at the Committee on Public Health in the Massachusetts State House, earning a commendation from the House of Representatives for Zanger’s “commitment to the arts.” More recently, she has combined her creative and political passions by helping to create and contribute to @artgirlzboston, an Instagram website that raises money for the Poor People's Campaign.

During her years of advocacy, teaching, and organizing, Zanger’s refuge was always Truro, the smallest and most rural Cape Cod town at the narrowest part of the Cape. She says, “The airs and magical light of the Outer Cape have renewed me every summer, and inspired a revival of my early love of art making.” Several years ago she won a residency at one of the historical Provincetown dune shacks, where she lived and worked alone without electricity or running water, salvaging driftwood and sea stars on the beach to make hand-rubbed monoprints.

“I am a seasonal worker,” Zanger says. “Perhaps it is because I don’t like to work from photographs  – but I find that I make art in response to the seasons.  The magnificent Cape dunes inspire me in the summer, and no matter how I try to prolong that work back in the studio I get distracted by the magnificence of the New England foliage. Then whenever I return from a diving vacation I feel that I just have to get those colors and forms down asap before they fly out of my head – since I can’t paint underwater! Living near the Arnold Arboretum where spring unfolds in centuries old trees gathered from the four corners of the earth – how could I ignore that?”

In her current practice, Zanger alternates between painting and monoprinting,  and she revels in exploring  new materials and innovating new techniques in both. For seven years, she has worked almost exclusively on Yupo,  a silky polypropylene paper that enhances the flow of watercolor. She has developed a technique she dubs monotype painting, which she describes: "I transfer a still wet painting onto a second sheet of Yupo paper, and then continue painting into both pieces, often continuing to print back and forth from one to the other. The surface tension generates unexpected textures and forms evocative of the natural world. After experimenting with the technique, I learned that it had been invented in France in the 19th century, popularized by Surrealists in the 1920’s, and known as decalcomania."

The adventurous spirit that inspired Zanger to explore Latin America and the deep sea has also led her to the practice of Qi Gong, the centuries old Taoist tradition that combines movement and meditation, as well as Tai Chi. “I didn’t  know why I was so drawn to it,” she says. “Until I found out that the form of Qi Gong that we are learning is the Water Element. Now I know. The peace that I feel when I practice these ancient movements feels the same as what I experience when I am 100 feet down in the ocean, where my movements are controlled only by the currents and by my breathing. And that flow is what my work is all about.”
Loading...